No, it’s not Croup

Jake has a cough. Again. Or should I say still? He seems to have had a cough almost permanently since he was about 8 months old. I remember, because the first time he went to the doctors about it, was the day that I had my operation. Sometimes it’s worse than others. It can vary between just a little tickle, to a hacking cough that keeps him (and us) up at night.

It makes me feel like a terrible mother when I take him out and about and he’s coughing all the time. I feel like people look at me as if to say I should keep him at home wrapped up in the warm. But if I kept him in every time he had a cough, we would never leave the house.

It’s not like I don’t care, or that I haven’t taken him to the doctors. We’ve been to the doctors on average about once a month with the damn thing. Depending on who you see, he might get steroids, calpol, or sometimes antibiotics. He’s even been seen at the Children’s hospital. It’s not like I’m not doing my job.

We went back to the doctors today, and she suggested that it could be asthma, so has given him an inhaler to try. So far, he has been very good with it and doesn’t seem to mind me giving it to him. 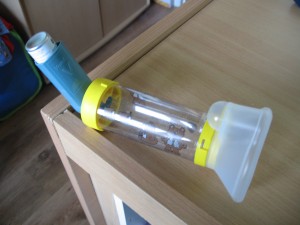 It didn’t stop me having to bite my tongue when I was out at the shops today. Some random woman looked at him and said “Oh dear, that doesn’t sound good, is it croup?”

“Are you sure? It sounds croupy to me.”

“Yes, I’m sure, we’ve been to the doctors today and he’s got an inhaler!” At which point I turned around and walked off, muttering to my friend that random woman should have minded her own business!

How is it, that someone you have never seen before, and are not likely to see again can make you feel like a terrible mother in one fell swoop?

This entry was posted on Monday, May 23rd, 2011 at 5:51 pm and posted in Appointments, Diagnosis, Friends/Family. You can follow any responses to this entry through the RSS 2.0 feed.
« Today, You are 2!
Save the Children »